When it comes to organic viticulture, it’s impossible not to mention Neipperg Vineyards. Indeed, Lord Stephan Von Neipperg has always perpetuated the long family tradition, always in the deep respect of the Terroir. A long-term work, rewarded in 2014 with Organic Agriculture certification for its two first Grands Crus Classés of Saint-Emilion: Château Canon-La-Gaffelière and Château La Mondotte. 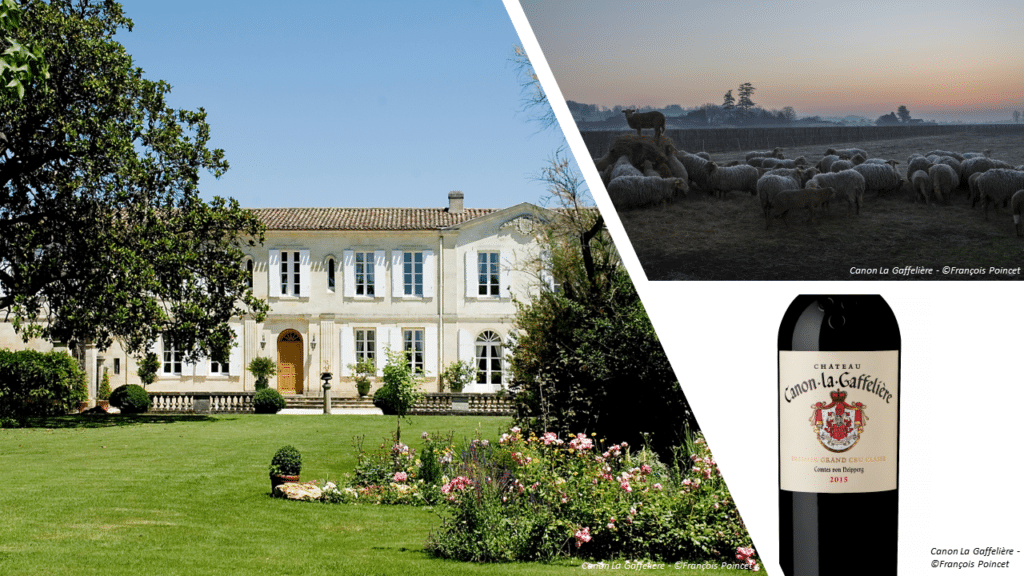 Present in the German estate since the 13th century, the vines are the heart of the daily life of the Von Neipperg family. Indeed, coming from the high Franconian gentry, the long line of Von Neipperg dates back to History at the beginning of the 12th century by founding the County Von Neipperg, gathering about thirty villages in the Württemberg valley, in Germany.

Throughout history, the destiny of the Von Neipperg family is as much related to viticulture as it is to the military. Since the seventeenth century, generals, soldiers and ambassadors who were also winegrowers have succeeded one another in this family. It was after some upheavals and political agitations between the Courts of France, Austria, and Germany, that the County von Neipperg was annexed by the Dux of Württemberg, named King by the Emperor’s grace. The Von Neipperg family kept part of their land and now had to devote most of their energy to developing the vine culture.

In 1971, Lord Joseph-Hubert Von Neipperg purchased Château Canon La Gaffelière. At this time, the domain already has a long-standing reputation. In 1983, Lord Von Neipperg proposed to his son Stephan to take the direction of Canon La Gaffelière. In his twenties at that time, Stephan Von Neipperg will quickly gain the esteem and confidence of his peers thanks to his qualities of spirit, his joviality and his determination to promote the wine of this estate. He spent his first two years at the head of the estate to make a meticulous inventory. The report is mixed. Production, despite a vineyard well managed and with a relatively large capital of old vines, showed a significant decline in quality in vintages after 1964.

Two reasons for this: a cyclical (the entry into production of young vines replanted after the freeze of 1956) and a structural one, concerning the generalization and the systematic use of chemical fertilizers and other heavy treatments from the beginning of the 60s.

Indeed, at the end of the War, this kind of crop was very comfortable with the type of agriculture favoring the amount of production. However, the excess of nitrogen and the soils depletion created a total and lasting imbalance in the soil and plants relationships. It was therefore essential to rethink the method. Thus, in 1988, Stephan Von Neipperg and his teams will therefore apply a complete redefinition of production values, while recreating an environmental balance. 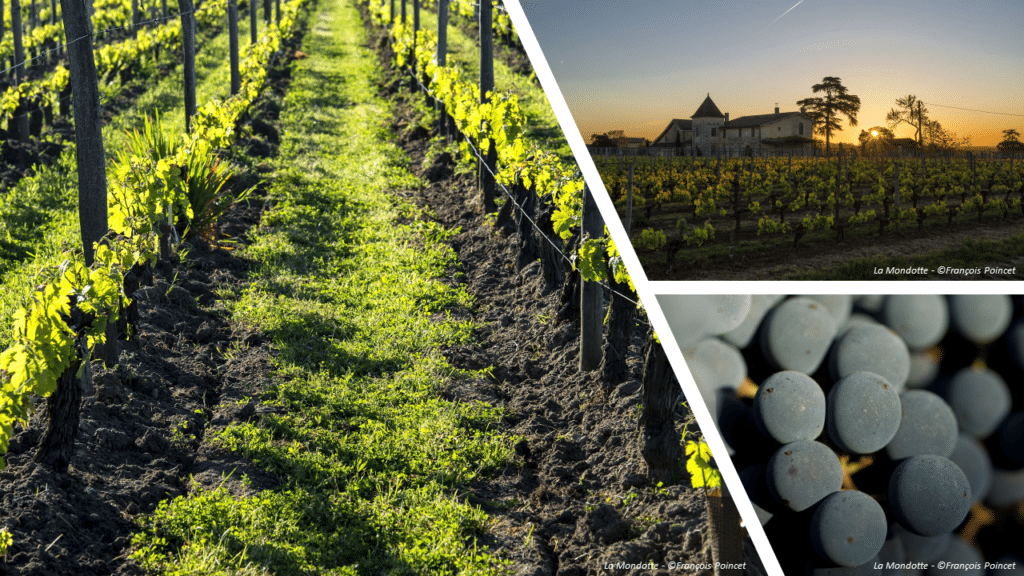 Neipperg Vineyards : Biodiversity as a priority

The arrival of Stephan Von Neipperg has introduced the bases of a new philosophy based on the respect of the different soils and, consequently, on the search for the autonomous balance of their ecosystems.

This ecological approach, instilled in 1988, will be implemented very quickly in order to transmit a healthy and coherent plant heritage to future generations. Indeed, the concept of family sustainability is very important for Neipperg Vineyards. Since the end of the 90s, the vineyard’s management has been constantly adapting to respect the environment. Each action taken since has been defined according to a precise parcel program and observation. Analysis have been the pillars of this evolution. Moreover, in 2006, Neipperg Vineyards created a research and development office.

As we explained here, 2014 will mark the consecration of these long years spent giving life and diversity to the vineyard thanks to obtaining the Organic Farming certification of Châteaux Canon La Gaffelière and Mondotte. On the other hand, these two properties obtained the same year the ISO 14001 standard within the SME.

The actions of Von Neipperg Vineyards to preserve the environment extend over several areas. So the balance of soil and plants is a top priority. The understanding of the terroir is primarily linked to the perfect knowledge of its structure and its needs, considered as a living entity by the Neipperg Vineyards. All interventions are adapted to the soil. Grassing is either natural or sown. In the autumn, different types of cereals (oats, barley, rye …) and legumes are planted inter-row because their roots favor a natural restructuring of the soil. Grinding and spreading on thick layer prairie soil recreates an extremely rich microbial life hummus with constant natural moisture.

These harvesting methods are just a few of many examples (exploitation of the Trichoderma potential, microbial fertilization, development of a composting platform, etc.). The conversion to organic farming was progressively made, as Stephan Von Neipperg explains: “for me, it was clear that we had to bring life back into the soil of our vines. Many in Bordeaux have gone too far in treatments, weed killers: when we see something that dies, we can not believe that the resulting product will be good. I believe in life. We did not invent anything, we only went back to what should never have been forgotten, but to make wines better than in the past. Welcome back to the Future. It can be seen, for example, that the fact of using anti-botrytis the most allows a better balance between phenolic maturities and alcoholic maturities. For three years, we have five times more soil life, we have more than 40 different herbs, and we feel it in the wine, which is more balanced, which has a different vibration. ”

Currently, Châteaux Canon La Gaffelière and La Mondotte are the only Premiers Grands Crus Classés in Saint-Emilion to have obtained certification in organic farming. 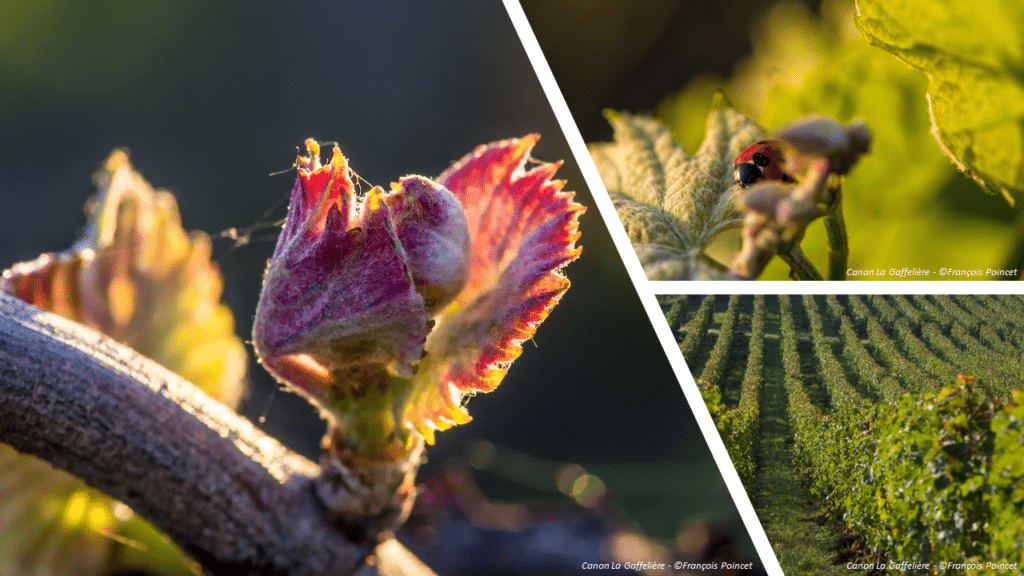 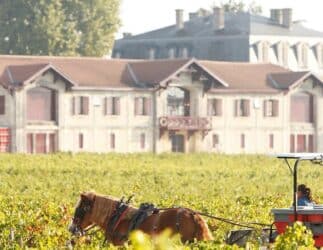