Bordeaux Tradition innovates for this new year 2016 ! Indeed, everybody knows that in deep water, temperature is constant: at 3280,84 feet, scientists consider it is around 41 or 42 degrees Fahrenheit. Any other habitat on Earth has this constant temperature. Darkness is continuous: at 492 feet in oceans, 99% of solar light have been absorbed. Over that point, in abyss, the night is completed. Also, vibrations or any movements are considerably reduced. More, there is a quasi total absence of microbial or vegetal life. So, you have guessed … Bordeaux Tradition innovates by diving 12 bottles of our wine Graves Blanc d’Ici 2015 in the depth of Bassin d’Arcachon thanks to our oyster farmer friend !!!

Still sceptical ? But remember … In 2008, 30 bottles of Veuve Cliquot produced between 1782 and 1785 have been fished out of wreck ran aground at the end of XVIIIth century, near from Aland island in Baltic sea at 196 feet. Two centuries after bottled, the most ancient champagne bottles known of the world have been described by Carl-Jan Granqvist as “endowed of tobacco and oak aromas, sweet as the taste has to be at that time. The wine has still its fruits, its freshness and maintain perfectly: it’s amazing !”.

That is not all, after 60 years under 12467 feet, divers have discovered undamaged bottles of champagne in the wreck of Titanic ran aground in 1912 ! As romantic as surprising when we know that the pressure is around 380 bars …

For the last suspicious, let us clarify that 6 bottles of wine from 1735, fished out from a wreck of XVIIIth century, has been sold for 9 700 euros by bottle, during a sell at auction …

So, if you are as impatient as us to find out the result of this experience, we make an appointment in June for our thinks after the tasting of this Grave Blanc d’Ici 2015 ! 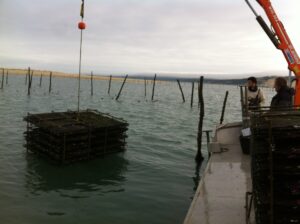 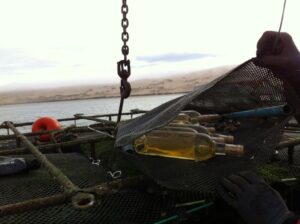