The extraordinary story of the 2014 vintage in Bordeaux 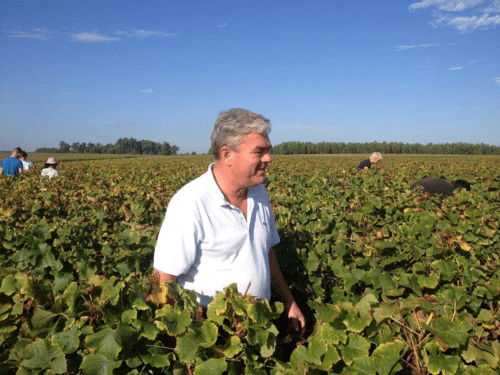 You have probably followed our page on the 2014 vintage, on which we released the first comments from wine makers and wine specialists. Today, we comes back with an global overview of the 2014 vintage build on the testimony of Olivier Bernard, President of Union des Vins de Bordeaux and the report on the Bill Blatch wrote at the request of Mr Bernard to tell you the 2014 vintage. For those who have never heard of Bill Blatch, after 40 years working in the Bordeaux Trade, he is considered worlwide as one of its best specialists.

The 2014 vintage had a promising start. The winter was very wet and warm, causing the vines to make a two-week early start. The early spring was marked by a warm April, a cold and wet May that, at first, caused some “coulure” and “millerandage” at the flowering. But later, the main body of the crop flowered fast and efficiently during the very hot first half of June, maintaining the two week advance.

Then it became more complicated: « a temperate, sunny, and wet summer set in and lasted until late August. This weather naturally tended to slow down ripening. Such unusual conditions called for meticulous, constant work in the vineyard to protect the vines and help them to produce the best possible grapes”, noticed Olivier Bernard.

But, we have ended up with a glorious end of season. Fortunately, summerlike weather arrived in the last days in August and lasted until the end of October. The warm and dry days encouraged the concentration of the berries and the cold nights enable to refine tannins. « September became the third hottest after 1921 and 1961, whilst October ended with an all-time record of 194 sun hours and a mere 42mm of rainfall, even less in the Médoc», outlines Bill Blatch.

The harvest occurred in optimal conditions. Merlot crops were delayed several times and were particularly prolonged. Cabernet Sauvignon was picked in prime condition, mostly during the second week of October.

Beside some twists, the quality of this vintage is great and it is “due to two main factors: a less-than-perfect summer that guaranteed freshness and an Indian summer of historic proportions conducive to ripeness and concentration, as well as wonderful balance…  In short, 2014 benefited from two summers in a row to produce a great vintage”, according to Olivier Bernard.

Click here to find the full report of Bill Blatch and Olivier Bernard’s testimony regarding the 2014 vintage.